According to the Centers for Disease Control and Prevention (CDC), six teenagers are killed in car crashes every day in the United States.  Even more teens are injured in car crashes across the country.

Unfortunately, at the Law Office of Raul A. Guajardo, P.L.L.C., we have seen far too many teen car crashes, because people didn’t recognize common car crash scenarios. Below are the leading causes of car crashes among teenagers, and what parents can do to reduce the risks.

Driver inexperience is the leading cause of death and injury among teen drivers.  The CDC reports the risk of crash is highest in the first year a teenager has their license.  To reduce the risk, parents should provide between 30 and 50 hours of supervision for their teen driver over a six-month period.  Parents should make sure their teen practices on different types of roads and highways, during different times of the day, during different weather conditions and traffic conditions. 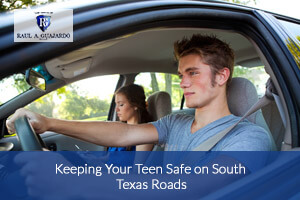 Failure to Use a Seat Belt

Seat belts save lives.  The simple action of wearing a seat belt is the easiest way to prevent car crash fatalities.  Parents should insist teens wear seat belts every time they get behind the wheel.  Seat belts can reduce fatalities or serious injuries by approximately half.

Distractions range from texting, talking on the phone, eating, playing music, and using navigation systems.  Teens should be reminded to refrain from engaging in any activity that takes their attention away from driving – even for a second.  By way of illustration, if a driver takes their eyes off the road for five seconds while driving 65 miles per hour, they cover the length of over 1 ½ football fields.  There are a lot of potential accidents that can happen in that time.

Teens lack experience, judgment, and maturity.  This is true behind the wheel just as in the rest of life.  Parents should model good behavior, like following the speed limit and being mindful of road conditions.  Parents should also refrain from following too close behind another vehicle.  They should talk to their teens about safety concerns.

Even one drink can impact a teen’s judgment and driving ability.  This increases the risk of a crash.  Parents should talk to their teen about this particular concern.

If You or a Loved One is Injured in a Crash

We certainly hope it never happens to you, but if you or a loved one is hurt in a car crash, you need legal representation.  At Raul A. Guajardo, P.L.L.C., we offer a free consultation to discuss your case.  We have offices in Edinburg, Brownsville, and McAllen for your convenience.  Contact us today.